Diesel Engines Used in the Oilfield

For work to be conducted efficiently and safely in the oilfield, special equipment is required to include diesel engines. These engines have a specific purpose based on the internal combustion design but also the way they operate with the assistance of the Diesel Cycle, a name representing the developer, Dr. Rudolph Diesel.

When comparing all types of engines, those that depend on diesel fuel have the highest rating for thermal efficiency and in fact, whether internal and external combustion, diesel engines are rated as the best. Another unique feature of these engines is the compression ratio as part of the design. With compression used to start the ignition process for burning fuel, the kind of heat produced is what sets them apart from other engine types for certain uses.

Another significant difference between diesel engines and gas powered engines, also referred to gasoline or petrol engines, has to do with oil in that diesel engines have oil injected. Additionally, using a unique “Otto-cycle”, which uses a mixture of air or fuel lighted by a spark plug diesel engines are the best choice for use within the or oilfield industry.

The exact type of diesel engine needed for oilfield work is one manufactured in twin versions to include two- and four-stroke designs.  Most oil rigs employ one or more full-time diesel engine mechanics to maintain efficient operation. As far as fuel or oil used to operate oil rigs, the correct choice would depend on the rig’s operation and configuration. There are instances in which oil would be the appropriate choice but in most cases, diesel fuel is used.

Keep in mind that rig engines are capable of operating on a variety of distillation crude fuel types, which includes the examples provided below:

The decision to use diesel fuels is based on a number of factors to include fuel cost, service requirements, and high quality of fuel synthesized from alcohol and vegetable oil. Along with ignition being difficult, developing normal fuel for diesel engines is a real challenge because of the high flash point to the degree that if burning oil becomes a very serious and hard to control type of fire. Diesel engines also pose a challenge not seen often with gasoline in that diesel fuel is more prone to water or dirt contamination.

Interestingly, people and industries that depend on the benefits that diesel engines provide question why these engines are not more widely used. Remember, diesel engines used in the oilfield industry are different from those found in large, powerful trucks that haul cargo and equipment. The loudness and unpleasant smelling black crude and smoke produced are a bad representation of diesel engines, not only for semi-trucks but also casual drivers considering the purchase of everyday vehicles manufactured to operate on diesel fuel.

Now, an efficient means of moving large materials over long distances is with rig fuel although the perception of diesel engines operating on diesel fuel is beginning to change thanks to significant changes that make it possible for materials to be hauled but with far less noise and pollution.

Within the oilfield industry both diesel engines and gasoline engines are used and in looking at the two from a mechanical standpoint, several similarities exist. For starters, engines in both cases are internal combustion, meaning conversion of chemical energy can be converted into mechanical energy when available, making this up and down movement of oil pistons connected to the crank possible. This up and down movement, which is known as “linear motion” is what makes the rotating motion possible. 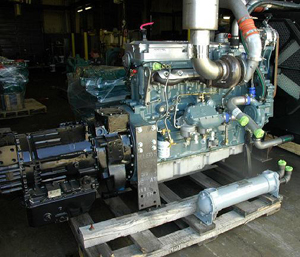 Keep in mind that a diesel engine’s oil has no spark plug. Instead, the engine takes in air and compresses it. With that complete, the direct oil injection helps with fuel being injected directly into the combustion chamber. Fuel within the fuel engine is lighted with assistance from the heated compressed air thanks to the injection process. In addition, for fuel to be compressed, engines that run on oil fuel use a port engine.

It is the mixture of fuel and air being compressed that limits the engine’s compression ratio. If the ratio were high, the mixture of fuel or air would create a spontaneous ignition whereby a knocking effect would develop. Damage would also be caused any time oil is overheated. The injector design seen in a fuel engine is actually quite complicated, which has led to tremendous experimentation being performed.

As a rule, the injector is designed to withstand a great deal of pressure and temperature within the cylinder but also deliver fuel via a fine mist. Along with circulating this fine mist of fuel within the cylinder, the injector ensures fuel has an even distribution. For this reason, various ingredients are used in some fuel tanks to aid with air circulation in the combustion chamber or to create a procedure for combustion and ignition, something assisted with the following.

A great deal of fuel oil is comprised with a glow plug. The only exception is with engines of great size that typically do not use glow plugs. However, for those that do, when a diesel engine is cold, the compression procedure may not be able to reach temperatures of any significance in relation to the engine starting.

Thanks to modern technology, diesel engines manufactured today are controlled by ECM communication functions. These functions depend on complex sensors capable of measuring coolant to fuel temperature, RPM, and even position of the engine. This innovative ECM has the ability to determine ambient air temperature and if needed, disrupt engine timing during extremely cold weather. That way, there would be a delay in the spraying of fuel by the injector.