Are you thinking about moving to Alberta to work in the oil industry but have no idea which city would make a great home? Alberta Oil Careers brings you the Guide to Oil Patch Cities in Alberta which will help you find a new place to call home.

Fort McMurray (or as it is commonly referred to, “Fort McMoney”) is located in northern Alberta along the Saskatchewan border in the Regional Municipality of Wood Buffalo. Now technically Fort McMurray is no longer incorporated so it is not listed as a city, but it has a population large enough to make several. The population of Fort McMurray in 2006 was tallied at almost 65,000 people and the “city” has a projected population of about 100,000 before 2012. Albertans make up about 50% of the Fort McMurray population followed by almost 40% of migrants from the Atlantic Provinces that for the most part were in search of work.

Being in heart of the Athabasca Oil Sands makes Fort McMurray one of North America’s major oil producers, but Fort McMurray’s economy also relies on the traditional oil sector, natural gas, and forestry.

Known as a “boomtown” Fort McMurray’s economy is growing at an exponential rate opening the doors for people in search of work. Right now there is an endless supply of job openings in Fort McMurray for anyone willing to relocate there.

There are several things you should consider before moving to Fort McMurray; living costs are far higher then one would expect from a comparably small northern Alberta area, and you are in a remote location. Aside from those two small factors Fort McMurray is an excellent place to live and find work.

Grande Prairie in the main city in Northwestern Alberta and is one of Canada’s fastest growing cities with a population of just over 47,000 with a growth rate of 23%. Grande Prairie is Alberta’s seventh largest city, and the biggest city between Edmonton and Alaska. Grande Prairie is surrounded by farmland and vast boreal forests.

The major industries in Grande Prairie are oil, natural gas, forestry, and agriculture. Although Grande Prairie is not known to be a “boomtown” there are still plenty of high paying jobs to be had by hard workers in the oil, gas, and forestry industries. 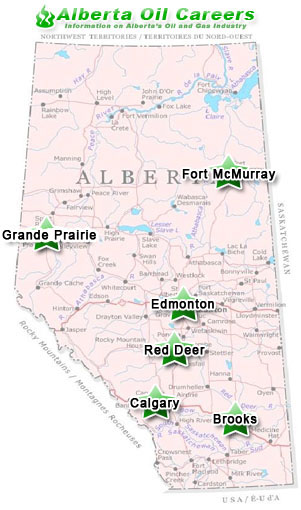 Edmonton is the Capital city of Alberta and boasts the provinces second largest population with over 730,000 permanent residents. Edmonton is the staging point for the large scale oil sands projects in northern Alberta as well as the Northwest Territories large diamond operations. Edmonton is one of two oil headquarters in Alberta where many oil companies base their operations from.

There are plenty of jobs to be had in Edmonton with oil and gas companies as well as in the oilfield service sector. If you are looking for a corporate job in the oil sector then Edmonton is a perfect place to start looking.

Red Deer Alberta’s third largest city behind Calgary and Edmonton with a population of 83,000 and is located almost directly between the two on the Calgary-Edmonton corridor. Red Deer’s economy is primarily focused on the oil and gas industry but also includes cattle production and grain.

Red Deer has a booming oil sector with lots of job opportunities available in the exploration, production, service, and maintenance sub sectors. Red Deer is an exceptional place to live with lots of employment opportunities, reasonable living costs, as well as great neighborhoods and schools for families.

Calgary is Alberta’s largest city (by population) with a population count of just over 988,000 and is the third largest city in Canada. Calgary is located in the foothills of the Canadian Rockies in Southern Alberta.

Calgary’s economy is dominated by the oil and gas industry and is home to the behemoths of the oil industry such as: British Petroleum, EnCana, Imperial, Shell, Petro Canada, Suncor, and TransCanada, as well as thousands of smaller oil and gas companies which lead to many job possibilities.

Calgary is an expensive city to live in and there isn’t very much affordable housing which makes it hard for someone moving to Calgary on a fixed budget. If you do not have a tight budget then Calgary is a great place to live but for those of you that do then you may want to look into a smaller city that is more affordable.

Brooks is one of Alberta’s newest cities (2005) with a population of 12,000 and is located southeast of Calgary in Southern Alberta in what is commonly referred to as the “Canadian Badlands.”

Brooks’ economy is solely driven by the oil and gas industry which is why it is often called an “oil patch town.” There are many companies in Brooks in need of skilled/unskilled employees, in Brooks many people find a new job the same day they begin looking for one.

On top of the excellent job market Brooks has a very reasonable cost of living, with plenty of affordable apartments and houses.